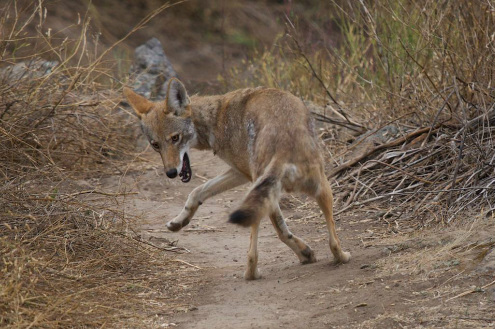 One thing Coyote has above all other animal spirits is a sense of humor. It is wonderful and coarse, and in total disregard of pain. Coyote will laugh at you without hesitation if you fall on your face. And there is no difference in his laughter when it is he who falls.

Coyote can be so smart, sometimes, that he outsmarts himself. Intelligent people do that all the time. But Coyote also has a way out...

We think that if only we can catch our tail, our problems will be over. But in order to catch our tail, we have to spin faster and faster. We are caught in the duality of trying to catch our own tail, but our tail is sensitive, so we never are truly willing to bite down on it.

Coyote knows that he must stop these thoughts, so he thinks he must somehow hunt them down and and kill them. But the thoughts are him. Many depressed people chase their thoughts in circles, trying to hunt them down and kill them. Some succeed, and commit suicide. But there is another way Coyote can rid himself of these Trickster Thoughts besides killing them. He can simply quit chasing his tail.

If you wish to quit chasing you tail, you have to know you *are* chasing your tail. You have to realize your tail can never be caught. You cannot will away your Trickster Thoughts, but you can start recognizing them as they are. You can let your tail get away, and be free.

Trickster Thought #1: Coyote is all or nothing. He is black and white. He is either perfect or flawed, and there is no in-between.

Trickster Thought #2: Coyotes love to jump, especially to negative conclusions which are not based on fact. He jumps into thin air.

Trickster Thought #3: Coyote loves to predict the future, but the future he howls about is always bad. He fails before he starts.

Trickster Thought #4: Coyote thinks he is so powerful he can do anything, and tells himself he *should* be able, even when he can't.

Trickster Thought #5: Coyote thinks if he feels cold, he must be sick, even if it is just the wind and *every* animal in its path is cold.

Trickster Thought #6: Coyote has a good day hunting, but misses the last rabbit. He forgets the rabbits he caught and thinks he has failed.

Trickster Thought #7: Coyote slips on a rock and simply sprains his paw, but he tells himself it is broken, and without it he will die.

Trickster Thought #8: Coyote believes that his song keeps the moon in the sky, and if he cannot sing, the moon will come crashing down.

Trickster Thought #9: Coyote sees a shadow and feels fearful, but even though the shadow passes, the feeling stays and is very real to him.


Coyote has great powers, both good and bad. Believe in your ability to tell the difference. Allow yourself to live in peace under the moon. Namasté.

(The original Trickster Thoughts are not my own work. The basic thoughts were passed on to me by a therapist. I have put these nine thoughts into my own words. The Coyote imagery is mine. They have helped me very much, and I thought I would pass them on.)